The mental battle after the car crash

Some people can struggle mentally in the wake of a crash. If this happens to you, it’s important to get help.

It might be a crash where you were the driver, a passenger, a pedestrian or even just an observer.

Lynda Matthews, the Head of the Rehabilitation Counselling Unit at the University of Sydney, says that while many people will recover totally, even from severe road crashes, up to 30 percent of people will have to deal with a negative psychological response.

“It’s not so much the severity of the crash or the severity of any resulting injury that counts – it’s how someone perceives it,” Dr. Matthews says.
“If you perceive the crash as life-threatening, or if someone is killed in the accident, then that can influence your response.”

The good news is that most people will recover from the anxiety which is a natural reaction to a stressful incident. Some people will have no symptoms of anxiety at all, others will have a few, while others will run the full gamut.
Common symptoms of anxiety include worrying, being very active, feeling irritable, unable to relax or sleep properly, having no energy, finding it difficult to concentrate, feeling upset, angry, confused, tired, helpless or ‘out-of-control’.

Anxiety can make a person feel unsociable and you may have unwanted thoughts or experience problems with personal relationships.

Dr. Matthews says that most people recovering from a crash generally focus first on physical recovery – treatment in hospital, visiting physiotherapists and the like. Saying it’s also very important for people to tell doctors if they are feeling anxious or distressed.
And that there are simple things you can do if you feel anxiety taking control.

“If you feel like it, it’s good to talk with people about the accident.

One of the most important parts of recovery is having support from family and friends,” says Dr. Matthews.

“It’s also very important to try and re-engage with your social scene and get back to work – to get back to your pre-crash lifestyle.”

You should seek medical advice if your symptoms:

Are worrying you.
Are preventing you from doing your normal activities.
Have lasted longer than three months after the accident.
Are causing your friends and/or relatives to be worried about you.
If your symptoms don’t ease after 3 months, or if your symptoms are severe enough to stop you living your normal life, then you have may an anxiety disorder, such as post-traumatic stress disorder. 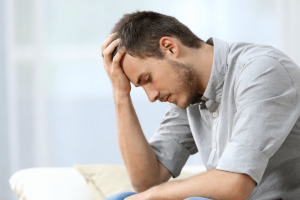 COVID-19 workplace cleaning tips
Guarding the future of your business
Agility is the gold standard in safety
What is good health and well being in lockdown?