What the experts say about schools reopening

There is a lot of anxiety and uncertainty surrounding the decision to open schools in South Africa next week. With an abundance of news and false news doing the rounds, we decided to dig a little deeper to see what’s happening around the globe, keeping in mind that South Africa has the advantage of having to some extent flattened the curve and that for the most part have some immunity afforded to us by virtue of immunizations because of the prevalence of TB in the country.

Clearly our high rate of TB, HIV, Diabetes, and Heart Disease means that our compromised adult population is at high risk, but our children may be in a better position than most.

In general, children are at extremely low risk of becoming ill from the virus, and adults – particularly older adults – are far more likely to be seriously ill and die from complications of the virus.

Half of all the people with confirmed coronavirus who were admitted to critical care units in England, Wales and Northern Ireland were 60 as at 15 May, and half were younger, according to a research charity. But the majority were over 50 and fewer than 10% were younger than 40.

Children have so far only accounted for between 1% and 5% of all diagnosed cases, according to Prof Adilia Warris, a paediatric infectious diseases specialist at the University of Exeter.

They often have “milder disease than adults,” she says, pointing out that deaths have been rare.

That’s encouraging news for us.

One study looking at cases in Shenzhen in China at the beginning of the year suggested that children were just as likely to catch the virus, raising the fear that they could be transmitting it without showing any symptoms. But research carried out since then has been more reassuring.

Studies of clusters of infections in family groups across China have concluded – based on contact tracing – that none of the infections were likely to have been introduced by children.

A study of a cluster of infections in the French Alps found that a child who tested positive for the virus did not pass it on to any of the more than 100 people they had contact with during the time they had symptoms.

Community studies in Iceland, South Korea, the Netherlands and Italy all found evidence children were less likely to have – or have had – the virus than adults. The Italian region studied tested 70% of its population.

A review of the evidence by a global team of researchers concluded: “The role of children in transmission is unclear, but consistent evidence is demonstrating a lower likelihood of acquiring infection, and lower rates of children bringing infections into households.”

On 16 May, Deputy Chief Medical Officer for England Dr. Jenny Harries said the government had opted for the one estimated to give the smallest increase in the R number – the measure of how fast the disease is spreading – while still bringing significant numbers of children back to school.

It was reported that in 22 European Union countries where schools were partially reopened, there hadn’t been a significant increase in cases, including among staff. These countries all opened up schools to different extents.

France did report a small uptick in cases after partially re-opening schools.

But World Health Organization (WHO) chief scientist Dr Soumya Swaminathan agrees that children are “less capable” of spreading the virus, and are at “very low risk” of getting ill from the disease.

“What we have seen in countries where schools have remained open is that there have not been big outbreaks in schools.” 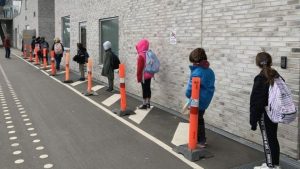