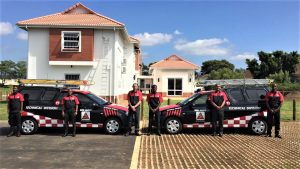 The forward thinking management team at St Charles College in Pietermaritzburg are focused on providing a safe and secure learning environment with priority given to the general welfare, safety and security of staff and learners. Our Red Alert KZN office was mandated to achieve as much professional HD CCTV surveillance as possible given that the college had previously used an analogue solution that due to ageing infrastructure, and limitations in terms of expansion capabilities, had become obsolete.

They engaged Red Alert Security as their preferred supplier to deploy their proposed Hikvision CCTV System as a fundamental element of their crime prevention strategy. The college has enjoyed rapid growth which necessitated new boarding accommodation on campus. The campus consists of numerous stand-alone buildings spread across a large area which presented a unique challenge in terms of camera deployment.

The use of Power Over Ethernet and Wireless Data Transmission to link each independent building and Network Video Recorder (NVR) to a dedicated control / server room were fundamental design elements of the new system. The wireless methodology paved the way for a seamless installation, omitting the need for widespread underground sleeves and civils. This would have otherwise resulted in significant disruption to the day to day activities of the campus during the installation process.

The Video Management Software (VMS), that makes it possible to marry all NVR’s into one centralised software display application, was provided free of charge, which reduced total cost of ownership considerably. The use of Power Over Ethernet (POE) across the range of Hikvision IP cameras further added to the reduced cost of camera deployment. The absence of power cables and less hardware made it possible to power cameras from secure tamper-free locations, which also translates to reduced long-term maintenance and cost of ownership.

A modular design comprised of multiple Hikvision 16 channel Network Video Recorders (NVR’s), and Gigabit Switches, were deployed at strategic locations within the numerous buildings around the campus. A Layer 2 fully managed Gigabit backbone and Cat-6 cabling insfrastructure were used to couple cameras to the NVR’s to create an extensive camera network topology, whilst also taking into account future expansion.

Due to the size of the college, a wireless topology was designed, consisting of point to multi-point solutions between buildings. The use of the right equipment ensured that there would be capacity for future expansion within the network, not only with wireless expansion but with multiple ports for fibre optic integration as and when it becomes necessary and available.

Each recorder streams video data from their independent locations to a primary viewing station which is housed in a secure environment. Management facilities for the NVR’s, wireless equipment and even the network switches are tied together for remote access and administration. The client has been provided with remote viewing capabilities from each of the recorders. Authorised user login’s are possible from remote PC’s, smartphones and/or tablets with an internet connection.

HD dome cameras with varifocal lenses were chosen for passageways around classroom entrances in order to achieve optimum viewing angles. Fixed lens dome cameras were chosen for all other internal areas of the facility. Vandal proof domes were used to eliminate potential tampering of the cameras field of view and focus. A vari-focal bullet camera was used at the schools main entrance gate. This camera produces HD quality imagery of pedestrian and vehicle details which include number plates. It also incorporates adequate infrared range at 30m to support and enhance camera images after dark and during the absence of any artificial lighting.

Red Alert are proud to be associated with St Charles College and they are looking forward to future expansion of the system to incorporate additional cameras as and when the need arises. The possibility exists for Pan-Tilt-Zoom (PTZ) and Thermal Imaging Cameras to cover the perimeter of the vast property that St Charles College occupies.

Hostage-taking, hijacking a ­disturbing trend
Crimes in churches a new low for SA
This is how convicted criminals planned house burglaries
The bottom line is employee wellness